Known as the Primer Libertador de America or “first liberator of the Americas,” Gaspar Yanga led one of colonial Mexico’s first successful slave uprisings and would go on to establish one of the Americas earliest free black settlements. Yanga was an enslaved worker in the sugarcane plantations of Veracruz, Mexico. In 1570 he, along with a group of followers, escaped, fled to the mountainous regions near Córdoba, and established a settlement of former slaves or palenque.

In 1609, Spanish authorities sent a well-armed militia to defeat Yanga. After defeating the Spanish forces sent against the palenque, Yanga offered to make peace but with eleven conditions, the most important being recognition of the freedom of all of the palenque’s residents prior to 1608, acknowledgment of the settlement as a legal entity which Yanga and his descendants would govern, and the prohibition of any Spanish in the community. Yanga, in turn, promised to serve and pay tribute to the Spanish crown. After years of negotiations, in 1618, the town of San Lorenzo de Los Negros was officially recognized by Spanish authorities as a free black settlement. It would later be referred to as Yanga, named after its founder. This tee honors that history.

There are no reviews yet.

Only logged in customers who have purchased this product may leave a review. 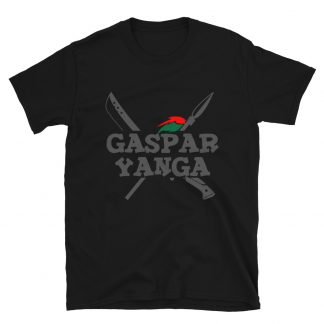